Two roads diverged in a wood, and I –
I took the one less traveled by,
And that has made all the difference. ~ Robert Frost

Every now and then, someone writes a book, prophesies a future, or reveals a truth of nature with startling insight and pristine clarity – books such as “To Kill a Mockingbird,” the prophets Moses or Edgar Casey, the revelations of atomic theory, forgiveness, relativity, or the unity of life and the universe. In a rush to maintain our notion of reality, we frequently vilify the messenger; later, people see the truth of the message and … the world changes.

The point isn’t about changing the world; it’s about changing ourselves. In “Selections from the Gospel of Sri Ramakrishna,” author Andrew Harvey says, “We are all heading into a whirlwind of catastrophe, war, heartbreak on the one hand, and, on the other, of unprecedented opportunities for real transformation, on a massive, world-altering scale.”

Isn’t that what humanity has been experiencing for millions of years? We will continually face war, pestilence, and destruction on the one hand, and, on the other, the possibility of peace and transformation. That’s not news; it’s reality; and it’s not going to stop happening – ever! It’s change and evolution. We make a mess of life and then make it worse, or we learn and then make it better. Life happens and we screw up, or not; and then it happens again; each time we’re on the threshold of heroism, villainy, or cowardice. We have choices to make.

The point isn’t what happens on the world stage; the point is, “what are you, personally, doing with your life?” The real message of the great men and women of history is not so much what they discovered, but the lives they led that opened their hearts and minds to those secrets. We each have within us that same spark of eternal wisdom patiently waiting to be ignited. Yes, life can be cruel and merciless; but it is also nurturing, benign, and lavish. 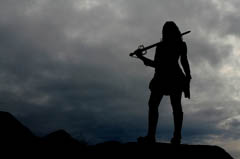 In “War of Art,” Steven Pressfield presents us with “a rogue’s gallery of” evils lurking within each of our minds to sabotage our every attempt to take life by storm the moment we take a single step in that direction. His word for these evils is “resistance.” The endless list includes resistance of addiction, procrastination, drama, and self-doubt. The truth is you can overcome them; but to do so you must be the warrior – vigilant, diligent, and bold. Then, and only then, do you taste the sweet nectar of the life of the hero. You will make dozens of choices today. Each one will serve either your passion, the life you were meant to live, or fear.

What are your dreams? Are you living them? Do you want to be the singer in the band, run a marathon, own a bed and breakfast, take a year-long trip around the world, have six-pack abs, or be an interior designer? It doesn’t have to be an opus to change the world, but it has to be your opus.

You have to work hard at it, that’s what it means to be the warrior. Are you telling yourself a story right now about how this is a nice idea, very poetic, but not reality? That’s Resistance! Fight it! That’s what the lives of Christ, the Buddha, Michelangelo, Leonardo da Vinci, and Aristotle were about. Daily, they fought the evil in their minds and, more importantly, they defeated it. They were authentic, they were true to themselves, and they were warriors. Take the road less traveled, live your opus, be the warrior.

Bhagavad-Gita (from chapter 2)
Hell has three doors: lust, rage, and greed. These lead to man’s ruin. Therefore he must avoid them all. He who passes by these three dark doors has achieved his own salvation. He will reach the highest goal at last.